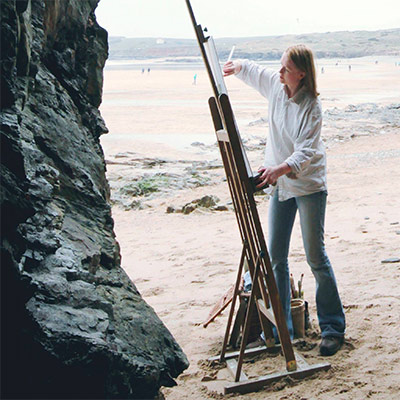 I moved to Cornwall from Lancashire in 2015 and began painting full time. I’m a beauty seeking nature lover, obsessed by the fascinating coastal rocks. To me, the tiny intricate details are like treasure and I love recreating them with various plaster, paint and natural mica crystals which catch the light like a seam of quartz in the rock.

“Many will remember her first, Gwithian Rocks, held there two years ago, acclaimed at the time as a promising debut, the works in her current show more than fulfil that promise, and should not be missed.
In every sense this is an impressive show.
As appealing as it is accomplished.”
Frank Ruhrmund – Times and Echo. December 2018

She first threw open the doors of her studio at Townshend, near Hayle for Open Studios 2015. “I’d never exhibited my art before, so it was great to be a part of something that was happening already” says Stephanie, who is softly spoken with an accent that betrays her Lancashire upbringing. “It’s such a great idea – you don’t feel so alone, and yet you can still do your own thing in your own way. It gave me so much confidence, and I’m really looking forward to it this year.”

She works in colourful acrylics, building up layers before sanding and scratching to reveal patterns and textures. The area around Gwithian, with Godrevy lighthouse to the east and St Ives to the west, has become the most recent muse to her work and many of the paintings on display are inspired by her emotional relationship with the rocks and ever-changing colours of this stunning shoreline. “Just touching and feeling the rock gives me a sense of self”, she says with conviction.

Stephanie grew up in the Ribble Valley, just north of Preston, and spent much of her childhood “writing songs, painting and daydreaming”. She made the move south-west two years ago, ” I felt so at home in Cornwall, as soon as I stepped off the plane at Newquay.”

“As soon as I moved down here, things started to happen for me.” Mitch Adams of 3S Films filmed her painting, which can be seen on here, and she has been offered a month-long run in August at the prestigious Penwith Gallery in St Ives.

“When I came to Cornwall, my goal was to show my artwork on a wall in St.Ives and within 18 months it’s happened so I’m really happy”, says Stephanie.

Oil & wax, acrylic & plaster, metal leaf & mica. Exhibition images to follow in September. Please contact me for an invite to the preview.

‘From Godolphin To The Sea’ – December 2018
Solo Exhibiton at The Penwith Gallery, St. Ives